In the previous blog we have seen the theory and mathematics behind the Logistic Regression Classifier.
Logistic Regression is one of the most powerful classification methods within machine learning and can be used for a wide variety of tasks. Think of pre-policing or predictive analytics in health; it can be used to aid tuberculosis patients, aid breast cancer diagnosis, etc. Think of modeling urban growth, analysing mortgage pre-payments and defaults, forecasting the direction and strength of stock market movement, and even sports.

Reading all of this, the theory[1] of Logistic Regression Classification might look difficult. In my experience, the average Developer does not believe they can design a proper Logistic Regression Classifier from scratch. I strongly disagree: not only is the mathematics behind is relatively simple, it can also be implemented with a few lines of code.

I have done this in the past month, so I thought I’d show you how to do it. The code is in Python but it should be relatively easy to translate it to other languages. Some of the examples contain self-generated data, while other examples contain real-world (iris) data. As was also done in the blog-posts about the bag-of-words model and the Naive Bayes Classifier, we will also try to automatically classify the sentiments of Amazon.com book reviews.

Short recap of the theory

We have seen that the technique to perform Logistic Regression is similar to regular Regression Analysis.
There is a function

which maps the input values

and this function is completely determined by its parameters

. So once we have determined the

values with training examples, we can determine the class of any new example.

We are trying to estimate the feature values

in the current iteration are calculated by updating the values of

from the previous iteration with the gradient of the cost function

One of its benefits is that the gradient of this cost function, turns out to be quiet simple, and since it is the gradient we use to update the values of

this makes our work easier.

Taking all of this into account, this is how Gradient Descent works:

*Usually the iteration stops when either the maximum number of iterations has been reached, or the error (the difference between the cost of this iteration and the cost of the previous iteration) is smaller than some minimum error value (0.001).

We have seen the self-generated example of students participating in a Machine Learning course, where their final grade depended on how many hours they had studied.

-axis. For each of these

-value is determined by

minus some random value. 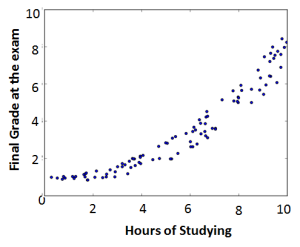 On the left we can see a scatterplot of the datapoints and on the right we can see the same data with a curve fitted through the points. This is the curve we are trying to estimate with the Gradient Descent method. This is done as follows:

times and update the

feature values simultaneously! This indeed results in the curve we were looking for:

After this short example of Regression, lets have a look at a few examples of Logistic Regression. We will start out with a the self-generated example of students passing a course or not and then we will look at real world data.

Let’s generate some data points. There are

students participating in the course Machine Learning and whether a student

In our example, the results are pretty binary; everyone who has studied less than 4 hours fails the course, as well as everyone whose studying time + sleeping time is less than or equal to 13 hours (

). The results looks like this (the green dots indicate a pass and the red dots a fail): 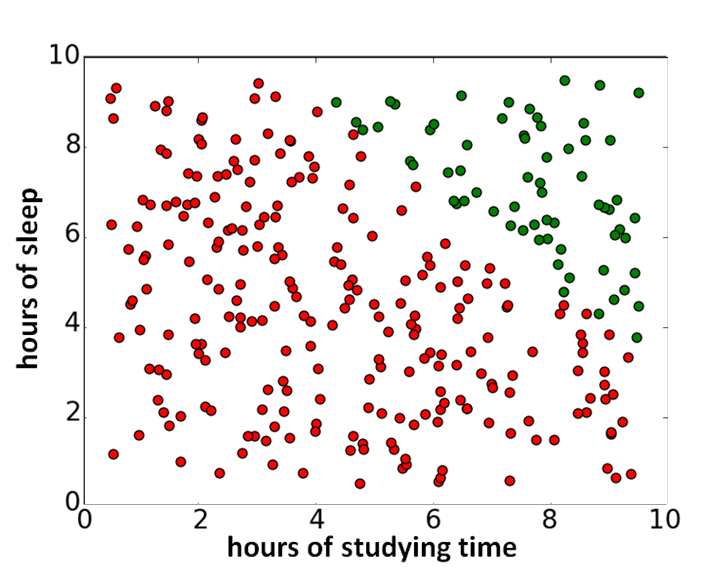 We have a LogisticRegression class, which sets the values of the learning rate

and the maximum number of iterations at its initialization. The values of X, Y are set when these matrices are passed to the “train()” function, and then the values of no_examples, no_features, and theta are determined.

We also have the hypothesis, cost and gradient functions:

With these functions, the gradient descent method can be defined as:

These functions are used by the “train()” method, which first sets the values of the matrices X, Y and theta, and then calls the gradient_descent method:

values have been determined with the gradient descent method, we can use it to classify new examples:

Using this algorithm for gradient descent, we can correctly classify 297 out of 300 datapoints of our self-generated example (wrongly classified points are indicated with a cross). 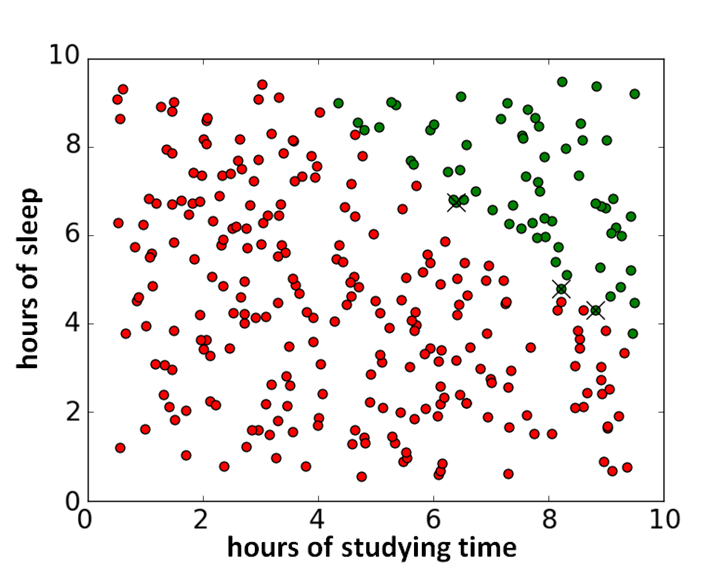 Logistic Regression on the Iris Dataset

Now  that the concept of Logistic Regression is a bit more clear, let’s classify real-world data!
One of the most famous classification datasets is The Iris Flower Dataset. This dataset consists of three classes, where each example has four numerical features.

As you can see, our simple LogisticRegression class can classify the iris dataset with quiet a high accuracy:

For a full overview of the code, please have a look at GitHub.

Logistic Regression by using Gradient Descent can also be used for NLP / Text Analysis tasks. There are a wide variety of tasks which can are done in the field of NLP; autorship attribution, spam filtering, topic classification and sentiment analysis.

For  a task like sentiment analysis we can follow the same procedure. We will have as the input a large collection of labelled text documents. These will be used to train the Logistic Regression classifier. The most important task then, is to select the proper features which will lead to the best sentiment classification. Almost everything in the text document can be used as a feature[2]; you are only limited by your creativity.

For sentiment analysis usually the occurence of (specific) words is used, or the relative occurence of words (the word occurences divided by the total number of words).

As we have done before, we have to fill in the

matrices, which will serve as an input for the gradient descent algorithm and this algorithm will give us the resulting feature vector

. With this vector we can determine the class of other text documents.

is a vector with

is the number of text-documents). The matrix

is the total number of relevant words in all of the text-documents. I will illustrate how to build up this

These three reviews will result in the following

As you can see, each row of the

matrix contains all of the data per review and each column contains the data per word. If a review does not contain a specific word, the corresponding column will contain a zero. Such a

-matrix containing all the data from the training set can be build up in the following manner:

Assuming that we have a list containing the data from the training set:

vector can filled in.

As we have done before, the gradient descent method can be applied to derive the feature vector from the

What should we do if a specific review tests positive (Y=1) for more than one class? A review could result in Y=1 for both the neu class as well as the neg class. In that case we will pick the  class with the highest score. This is called multinomial logistic regression.

So far, we have seen how to implement a Logistic Regression Classifier in its most basic form. It is true that building such a classifier from scratch, is great for learning purposes. It is also true that no one will get to the point of using deeper / more advanced Machine Learning skills without learning the basics first.

For real-world applications however, often the best solution is to not re-invent the wheel but to re-use tools which are already available. Tools which have been tested thorougly and have been used by plenty of smart programmers before you. One of such a tool is Python’s NLTK library.

NLTK is Python’s Natural Language Toolkit and it can be used for a wide variety of Text Processing and Analytics jobs like tokenization, part-of-speech tagging and classification. It is easy to use and even includes a lot of text corpora, which can be used to train your model if you have no training set available.

Let us also have a look at how to perform sentiment analysis and text classification with NLTK. As always, we will use a training set to train NLTK’s Maximum Entropy Classifier and a test set to verify the results. Our training set has  the following format:

As you can see, the training set consists of a list of tuples of two elements. The first element is a list of the words in the text of the document and the second element is the class-label of this specific review (‘neg’, ‘neu’ or ‘pos’). Unfortunately NLTK’s Classifiers only accepts the text in a hashable format (dictionaries for example) and that is why we need to convert this list of words into a dictionary of words.

‘
Once the training set has been converted into the proper format, it can be feed into the train method of the MaxEnt Classifier:

Once the training of the MaxEntClassifier is done, it can be used to classify the review in the test set:

So far we have seen the theory behind the Naive Bayes Classifier and how to implement it (in the context of Text Classification) and in the previous and this blog-post we have seen the theory and implementation of Logistic Regression Classifiers. Although this is done at a basic level, it should give some understanding of the Logistic Regression method (I hope at a level where you can apply it and classify data yourself). There are however still many (advanced) topics which have not been discussed here:

If you see any errors please do not hesitate to contact me. If you have enjoyed reading, maybe even learned something, do not forget to subscribe to this blog and share it!

[2] See for example Chapter 7 of Speech and Language Processing by (Jurafsky & Martin): For the task of period disambiguation a feature could be whether or not a period is followed by a capital letter unless the previous word is St.