Most tasks in Machine Learning can be reduced to classification tasks. For example, we have a medical dataset and we want to classify who has diabetes (positive class) and who doesn’t (negative class). We have a dataset from the financial world and want to know which customers will default on their credit (positive class) and which customers will not (negative class).
To do this, we can train a Classifier with a ‘training dataset’ and after such a Classifier is trained (we have determined  its model parameters) and can accurately classify the training set, we  can use it to classify new data (test set). If the training is done properly, the Classifier should predict the class probabilities of the new data with a similar accuracy.

Logistic Regression assumes there is some function

which forms a correct model of the dataset (i.e. it maps the input values correctly to the output values). This function is defined by its parameters

. We can use the gradient descent method to find the optimum values of these parameters.

The Naive Bayes method is much simpler than that; we do not have to optimize a function, but can calculate the Bayesian (conditional) probabilities directly from the training dataset. This can be done quiet fast (by creating a hash table containing the probability distributions of the features) but is generally less accurate.

The Perceptron is a lightweight algorithm, which can classify data quiet fast. But it only works in the limited case of a linearly separable, binary dataset. If you have a dataset consisting of only two classes, the Perceptron classifier can be trained to find a linear hyperplane which seperates the two. If the dataset is not linearly separable, the perceptron will fail to find a separating hyperplane.

If the dataset consists of more than two classes we can use the standard approaches in multiclass classification (one-vs-all and one-vs-one) to transform the multiclass dataset to a binary dataset. For example, if we have a dataset, which consists of three different classes:

Although the one-vs-one can be a bit slower (there is one more iteration layer), it is not difficult to imagine it will be more advantageous in situations  where a (linear) separating hyperplane does not exist between one class and the rest of the data, while it does exists between one class and other classes when they are considered individually. In the image below there is no separating line between the pear-class and the other two classes.

Another difference is; If the dataset is not linearly seperable [2] the perceptron will fail to find a separating hyperplane. The algorithm simply does not converge during its iteration cycle. The SVM on the other hand, can still find a maximum margin minimum cost decision boundary (a separating hyperplane which does not separate 100% of the data, but does it with some small error).

It is often said that the perceptron is modeled after neurons in the brain. It has

input values (which correspond with the

features of the examples in the training set) and one output value. Each input value

is multiplied by a weight-factor

. If the sum of the products between the feature value and weight-factor is larger than zero, the perceptron is activated and ‘fires’ a signal (+1). Otherwise it is not activated. 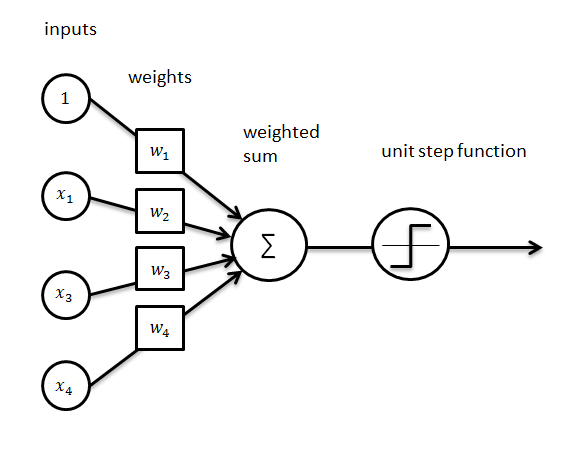 The weighted sum between the input-values and the weight-values, can mathematically be determined with the scalar-product

. To produce the behaviour of ‘firing’ a signal (+1) we can use the signum function

Thus, this Perceptron can mathematically be modeled by the function

is the bias, i.e. the default value when all feature values are zero.

The perceptron algorithm looks as follows:

As you can see, we set the bias-value and all the elements in the weight-vector to zero. Then we iterate ‘max_iter’ number of times over all the examples in the training set.

is the predicted output value. It will be

if the prediction is correct and

will be -1, and the weight vector

and updates the values of the weight-vector.

Now lets examine the Perceptron algorithm for a linearly separable dataset which exists in 2 dimensions. For this we first have to create this dataset: 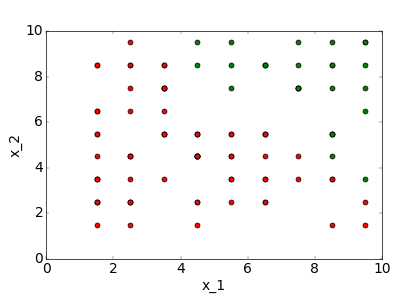 In the 2D case, the perceptron algorithm looks like:

As we can see, the weight vector and the bias ( which together determine the separating hyperplane ) are updated when

The result is nicely illustrated in this gif: 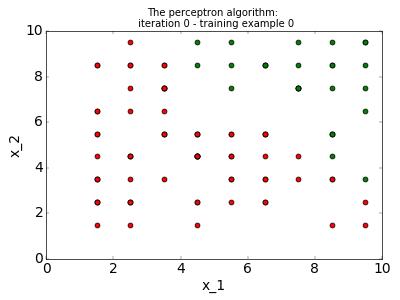 We can extend this to a dataset in any number of dimensions, and as long as it is linearly separable, the Perceptron algorithm will converge.

One of the benefits of this Perceptron is that it is a very ‘lightweight’ algorithm; it is computationally very fast and easy to implement for datasets which are linearly separable. But if the dataset is not linearly separable, it will not converge.

For such datasets, the Perceptron can still be used if the correct kernel is applied. In practice this is never done, and Support Vector Machines are used whenever a Kernel needs to be applied. Some of these Kernels are:

At this point, it will be too much to also implement Kernel functions, but I hope to do it at a next post about SVM. For more information about Kernel functions, a comprehensive list of kernels, and their source code, please click here.

PS: The Python code for Logistic Regression can be forked/cloned from GitHub.

10 gedachten over “The Perceptron”